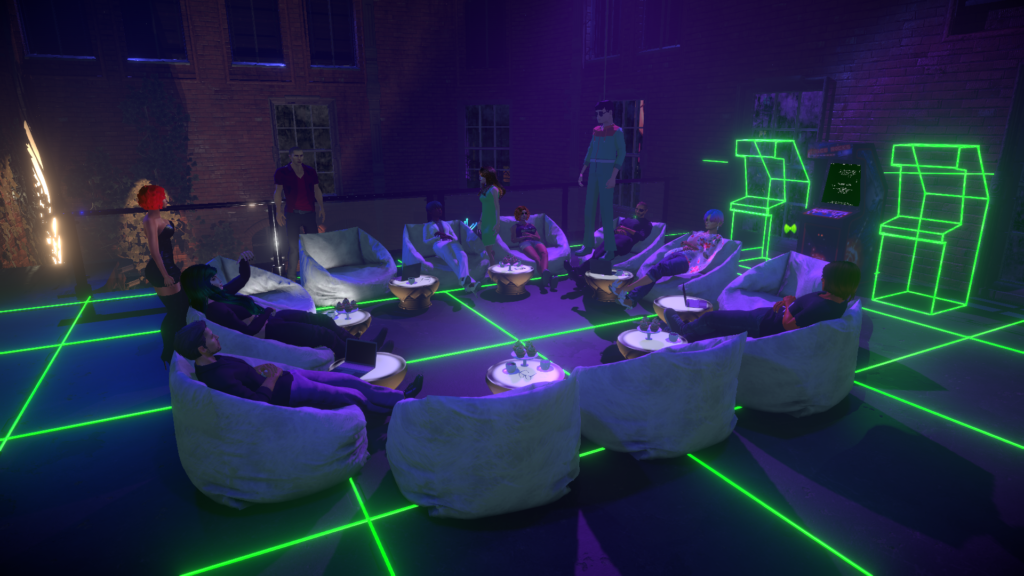 To kick off the meetup this week, we talked about some interesting news involving genetic manipulation. Scientists discovered a way to gene-hack human cells to turn invisible (or at least function as a dynamic camoflauge)! Here is a link to the story: https://futurism.com/gene-hack-human-cells-turn-invisible . There was some discussion on the implications of this, and what exactly it might be used for. The thought came about that to actually use it, you would have to be naked. And would you actually be able to control it and/or turn it off?

The next article discussed the possible requirement to tweak humanity’s DNA in order to colonize Mars, or endure prolonged space travel. Here is a link: https://www.space.com/mars-colony-human-genetic-engineering-tardigrades.html . This expanded into a discussion on the effects of space on the human body, and how they recorded the differences in DNA of the NASA twins after one of them spent a year on the ISS.

Artemis and I had just finished watching a good show on Amazon Prime called “Upload”. We recommended to everyone to check it out if they have a chance. The premise revolves around people being able to upload their consciousness into a virtual world before they die, so that they could essentially live forever. There was some interesting takes on where society is going and some virtual world comedy as well. The American Amazon link is here: https://www.amazon.com/gp/video/detail/B0858ZPY17/ref=atv_hm_hom_1_c_iEgOEZ_3_1 . And the UK link is here: https://www.amazon.co.uk/Upload-Official-Trailer/dp/B0859J21SC/ref=sr_1_1?dchild=1&keywords=upload&qid=1591633421&s=instant-video&sr=1-1 . Some of the comedy reminded me a bit of the TV show “Chuck”, which I also highly recommend if you are looking for a geeky comedy to watch. Continuing the theme of TV shows worth watching, we discussed Star Trek Discovery, Picard, and the Star Trek conventions.

We transitioned to some quick Trivia as follows:

Sitearm asked everyone who their favorite Star Trek character is/was in the old/new series. Answers ranged wildly and included: Data, Sarek, Spock, Scotty, Quark, McCoy, Harcort Fenton Mudd, Captain Pike, Nyota Uhura, and of course shirtless Captain Kirk. The mention of Spock and Vulcans in general encouraged some sharing of people’s Meyers Briggs personality types, including INTJ, ISFJ, INFJ, and ISTJ. Interesting to see so many introverts gathered together, although our normal subject matter I think is attractive to introverts. If you haven’t taken a Meyers Briggs personality test yet, you can do one here: https://www.16personalities.com/free-personality-test . I think this would be a good subject matter next week. For something to share next week, bring your personality test results.

Continuing in our Geek Weekly meetup, I threw out the question of what people have been exploring in Sinespace and if anyone had managed to break in to Adams office in Sudin yet. There wasn’t much of a response as far as new places people had explored, and so far, no one has snuck in to Adam’s office. We may have to schedule a break in event…

Taking a look at future events, I asked whether anyone would like to host an event here? We have an automated calendar on localhostconnection.com. We are still fleshing things out there, but it is functional.

I was talking with Chepsos the other day and asked if there was anything he thinks would be cool to see here in localhost, as I’m preparing to build out the city some more, but would like to focus efforts on things people would like to see first. We also brainstormed some ideas for names of these different establishments in the city. I am contemplating creating a cyberpunk apartment to provide as a free home region. The door to the apartment, upon walking through, would teleport you in front of your “linked” door within the apartment building here in localhost. Apartments could be named, “Reboot I/O” per Chepsos’ and my brainstorm session. My thinking is that this might encourage people to “live” here, grow a community, and develop immersion. Some other items we discussed about adding to the city:

I didn’t see or hear too much input on what people would like to see first, although, towards the end of the meeting, it did sound like the apartment idea was of interest to some. If you have a preference on any of the ideas, feel free to send me a message or comment on this post.

We did talk a bit about a street DJ battle on the streets of localhost, and how we plan on mixing the streams from multiple DJs. There was also some interest in doing a stand-up comedy show, or a “who’s line is it anyway” type of show. Of course, we have to be mindful of language, being PG-13, but that may be as simple as showing the disclaimer at teleport, much like some of the music events are doing now for explicit lyrics.

Surrey made an announcement that a “Meet the Founders” event was in the works, and they plan on doing said event on Thursday, June 11th [This has now been delayed to June 25th]. The venue is TBD.

Another event Jayden and Lesiar are planning is a type of in-world build-off. Contestants assembling something cool with builder packs using the in-world room editor functions.

One last bit of news was that Good Old Games is in the middle of their summer sale, so if you are looking for some good games for good prices, check out https://www.gog.com .

I also asked what people’s favorite regions or items in Sinespace were:

As always, I hope everyone who attended had a great time and that you have a great week. Anyone who couldn’t make it, we hope to catch you next time. See you again soon at Geek Weekly!