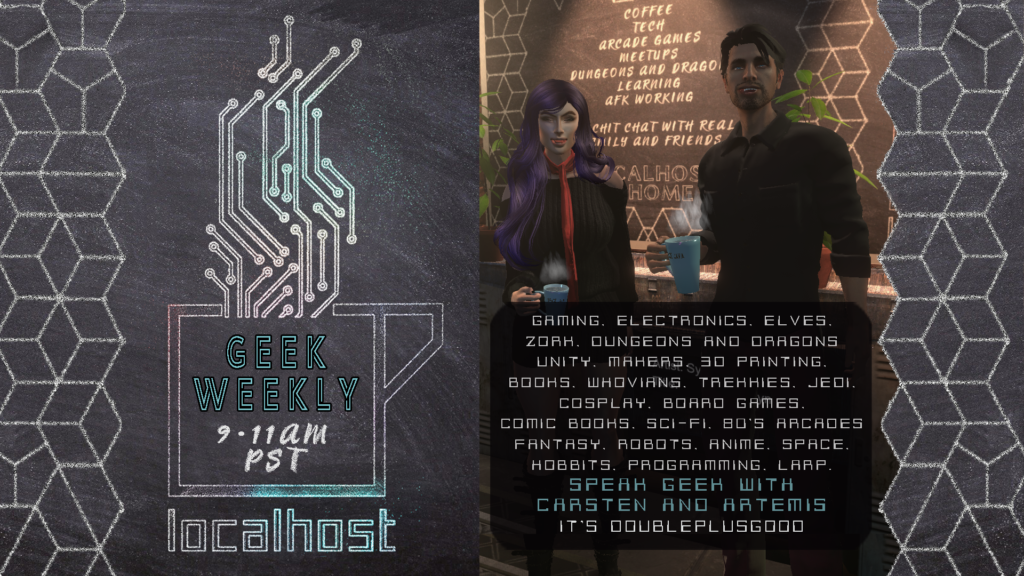 This week we kicked off the meetup by taking a look at some interesting news from the last several days.

We threw a few questions out there to get people talking.

In discussing future events, Artemis and I (Carsten) made a statement that we are putting our plans for on-boarding outside groups, as well as some other product development, on hold until the viewer bugs and basic functionality is sorted out. There has been virtually zero success in on-boarding with everyone we’ve worked with so far. 100% of potential new users have experienced show stopping issues in relation to the viewer. Issues with the 1b viewer are also causing a lot of problems with building usable items for in world. That said, we plan on continuing to host Geek Weekly until things are ironed out, and everyone is welcome to join us here as well as host their own events here. https://localhostconnection.com is up and running in basic form now, complete with an event calendar that anyone can submit an event for. We have a link to a discord server on the page as well. The website will be slowly expanded with more functionality.

There was some discussion surrounding Sinespace’s economics and how virtual worlds operate with real world currency. Some ideas were put out there for kick-starting the virtual world economy through a form of stimulus (ie free gold). It was brought up that this is probably the intention for the silver currency without causing a severe financial burden on Sinespace, but of course, items available in silver currency are limited. There is also the concern for builders and how they track their earnings in a way that helps with reporting to the IRS and operating as a legitimate business. The main point was figuring out how you bring more builders into Sinespace, so that end users actually have quality products they would actually be motivated to spend gold on.

We plan on hosting some form of builder conference or workshop, but need a little more time to get set up. It would also be good if the viewer was unified by then under a single branch so that we don’t need to go over so many work arounds. I also don’t want to be the only person hosting the event, but making it more of a community project where multiple people can pitch in to teach the things that they know. Artemis highlighted the efforts of Brisana and how she came in with zero experience, and has now figured out the full workflow of assembling items within Unity and uploading to Sinespace. She is now moving on to some more advanced topics like putting poses/animations into a seating component. She did state however, “The only reason I keep trying is because I’m stubborn. But it can bring you to the point of tears and want to throw up your hands and say I’m done, lol”. There is a general consensus that the existing tutorials and how things are done in Unity is fine for people that are familiar with those types of things, but for brand new creators, there needs to be a more basic level of tutorial/instruction either created or linked to, and this is something that we could cater to in our event(s)… basic/intermediate/advanced levels of instruction.

There was a bit of trivia, once again:

So far, it sounds like no one has managed to break in to Adam’s office in Sudin. We may have to have a little presentation on that if no one figures it out in the next few weeks.

It was suggested that we hold a cyberpunk street party in which we discussed our idea for a dance battle system, much like a break dance face off from the 80s. We could hold it in the streets of localhost. Throw out some street barricades and face off in front of the bus stop!

We asked if anyone had any good jokes. Artemis pointed out that I was good at “Dad” jokes, to which I replied, “Why are pirates so mean? They just Arrrrrrrr”. Inquisitive Loon said, “My doctor told me I need to lose 10 pounds. Told this to a RL friend and she asked, “Are you looking for another Doctor?””.

Sitearm suggested we take a look at: Virtual Presence in Self Identity – Panel discussion – Avatar Psychology – /Science Circle/ gender identities and educational processes in virtual worlds. https://youtu.be/ZcgaN_dn2iE?t=422 . This spurred some discussion on experience of having an avatar of the opposite gender and how that shapes your experience interacting with other users. Also, how we explore other virtual worlds and games (and maybe we’d like to have field trips to other games as well… create a guild or something).

Thanks to everyone who made it on Monday, and for those who couldn’t make it, we hope to catch you next time!